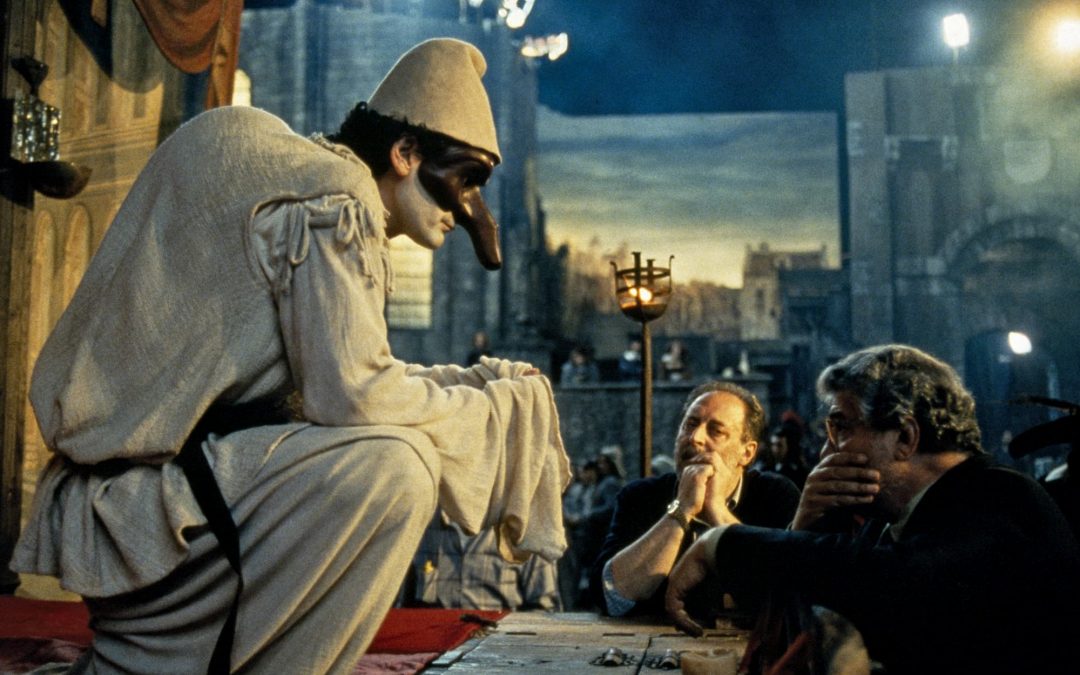 From Teatro dei Dioscuri to Cinecittà!
From 17 April to 30 October 2019, for the duration of the “Troisi poeta Massimo” exhibition at the Teatro dei Dioscuri, Cinecittà Shows Off will host “Omaggio a Massimo Troisi” (Tribute to Massimo Troisi): an exploratory tour through his films, costumes and original props from the masterpieces shot at Cinecittà: Nothing Left to Do but Cry; The Voyage of Captain Fracassa and Il postino: The Postman.
The tour – which unwinds through the rooms with the permanent displays – pays tribute to Troisi through original scenic material: from his costume as Pulcinella, a role created by Ettore Scola specifically for Troisi, in The Voyage of Captain Fracassa which was shot in 1989 in Cinecittà’s Teatro 5, to the costumes for Nothing Left to Do but Cry which evoke the memorable style of the janitor Mario (Troisi) and the teacher Saverio (Roberto Benigni), and include those worn by Amanda Sandrelli as Pia, by Iris Peynado as the Amazon Astriaha and Paolo Bonacelli as an exceptional Leonardo da Vinci.
The previously unreleased footage shot backstage on the set of Il postino: The Postman and directed by Stefano Veneruso will be shown for the first time in the landmark Visconti screening room.
Unusual and iconic props – such as the postbag from Il postino: The Postman, Leonardo da Vinci’s astrolabe from Nothing Left to Do but Cry and the packing trunks from The Voyage of Captain Fracassa – will be displayed alongside clips from the same films.
To mark this double tribute, visitors to the exhibition at the Teatro dei Dioscuri will be entitled to a discount coupon worth a reduction of €2.00 on a full price ticket to Cinecittà Shows Off which can be used to visit the Cinecittà Studios with the sets, the permanent exhibition and the temporary display Omaggio a Massimo Troisi.
The film costumes were selected by Anna Lombardi for A.S.C. – Associazione italiana Scenografi, Costumisti e Arredatori. With thanks to the scenic warehouse, E. Rancati.

OMAGGIO A MASSIMO TROISI (Tribute to Massimo Troisi)
Cinecittà Studios– Rome, Via Tuscolana 1055
From 17 April to 30 October 2019
Open daily (except Tuesdays) from 9.30 a.m. to 6.30 p.m.
The ticket office closes at 4.30 p.m.
Advance booking for the guided tours is not necessary for individuals or families. Groups of more than 15 people, Cral and school must book their visits at mostre@boxeventitalia.it

Discount of €2.00 on a full price ticket to Cinecittà Shows Off is available on presentation of the discount coupon from Teatro dei Dioscuri.
The promotion cannot be used with other discounts.