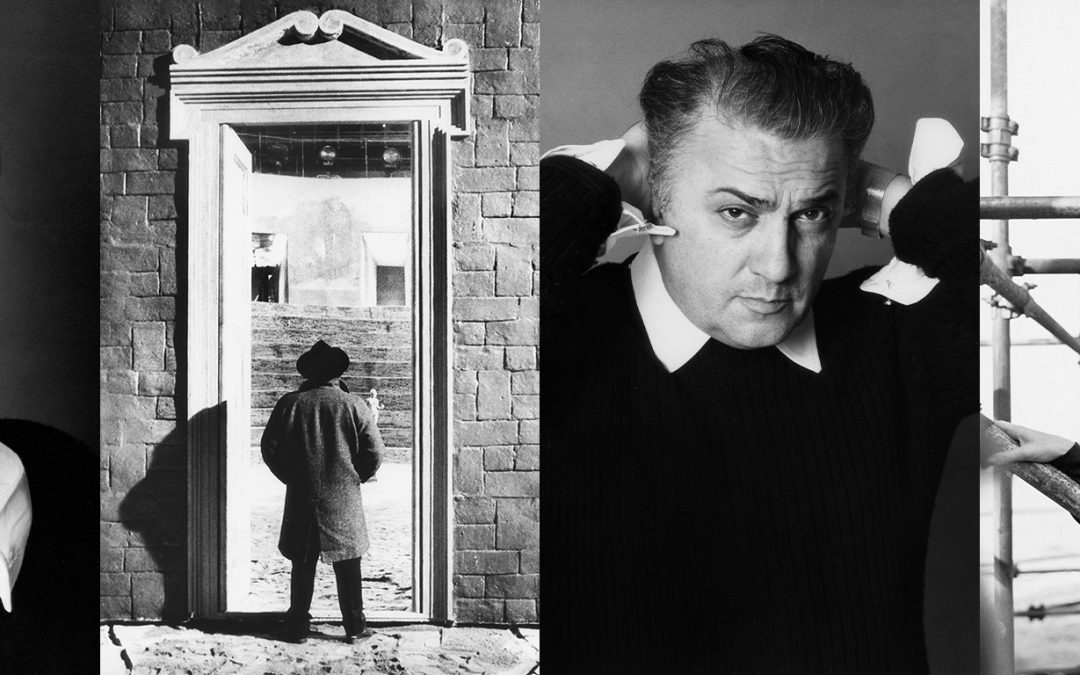 Istituto Luce-Cinecittà presents ‘Ri-tratto rosso. Elisabetta Catalano guarda Federico Fellini’, an important multimedia and photographic exhibition dedicated to the director from Rimini, crowning the events of his Centenary with the gaze of the internationally-renowned photographer Elisabetta Catalano.

The exhibition was due to open in December 2020 to close the global celebrations of 100 years of Federico Fellini. Now health and safety protocols permit and visitors may be welcomed once again, the exhibition opens in the very place, Cinecittà Studios – his ideal home – where the tribute to the Maestro of Italian cinema was symbolically inaugurated on 20 January 2020.

On display in Teatro 1 at Cinecittà Studios until 26 April 2021, Ri-tratto rosso is curated by Aldo E. Ponis, with artistic direction by Emanuele Cappelli and texts, scientific research and iconography curated by Laura Cherubini and Raffaele Simongini, it was made possible thanks to the images of the extraordinary Archivio Elisabetta Catalano.

Ri-tratto rosso recounts the story of a dialogue. The dialogue between the genius of Italian cinema and the great photographer, the internationally-renowned queen of the portrait. The person by whom Fellini enjoyed being photographed and immortalized probably more than any other person. A relationship of images created and intertwined for three decades which shows us the work of a great artist and an unexpected, previously unseen side to Fellini.

The display route unfolds in over 60 photographs, some in large and extra-large formats, from the Archivio Catalano and includes five Fellini sets that Catalano was asked to document: 8½ (1963), Fellini’s Satyricon (1969), Orchestra Rehearsal (1979), City of Women (1980), The voice of the moon (1990), and a curious appendix for Fellini’s Intervista (1987).

Following Catalano’s visits to Fellini’s sets, the exhibition shows the exchange of courtesies: Fellini made regular visits to her studio between 1973 and 1993 for a set of magnificent portraits where he poses unrepeatably happy and complicit. An exchange of gazes, illuminating visual intuitions, that closes with an amusing appendix of the portraits that depict Fellini’s relationship with television.

Among the elements of the exhibition, the contact sheets – from where Catalano would select the chosen image for printing – are particularly significant. Dozens of negatives piled up on the same table, with rarely a circle, a note, that strong stroke of red pen denoting the chosen print. Catalano would take hundreds of pictures in every session and was extremely severe in her choice of the “right shot”, the result of a well pondered, febrile selection. Visitors to Ri-tratto Rosso will see shots of astounding beauty and creative clarity, passed over by the photographer and her stroke of red.

The title of the exhibition cites both that stroke and the colour that recurs in Fellini’s world and in the pictures on display (just think of the director’s famous scarf). Amidst the other photographs in the exhibition these contact-sheets are also a true work of art that offer an unknown sliver of Fellinian imagination.
Another highly significant element in the exhibition is represented by the backdrops that Catalano used for her portraits. These are large, speckled panels, painterly, where she would pose her subjects to poetic and striking chromatic effect. The panels, used here to document Catalano’s work process, are a powerful artistic addition to the exhibition display.

The visitor will also be surprised to find a reconstruction of part of the photographer’s studio: the work table, cameras, contact sheets and the lighting equipment that belonged and was used by Elisabetta Catalano. A special display technique invites the visitor to “spy” inside the studio, as if the guest in a hidden dark room.

The set of studio portraits on display is the emotional heart of the exhibition. Here the Maestro’s complicity, playfulness, metaphysical and seduction are distilled in Elisabetta Catalano’s “paintings”. Immediately striking are the physical use of his hands (the gesture of “wizard” Fellini), the bright intelligence in his expression. One of the last portraits is very moving: a tuxedoed Fellini in the shadows, but no way diminished, was taken just before receiving the Academy Award for his career. He looks cheeky, seductive and endlessly knowing as he poses at Cinecittà next to the film camera. He is effervescent, amused and sharp in the magnificent portraits Catalano creates to illustrate his crusade against television in the years when the director protested the interference of advertising, the decline of cinematic make-believe in the wake of pervasive television, the hubbub of images and chatter of a new type of entertainment obscuring the silent mystery of the darkness of film.

Cinecittà re-opens to the public and, with this exhibition, brings to a close the celebrations for Federico Fellini’s Centenary from the place that was his ideal home, spiritually and professionally, through the pictures of a great photographer whose luminary career began here, in Cinecittà, on a Fellini set.
The exhibition is created and promoted by Istituto Luce-Cinecittà with the support of DG Cinema e Audiovisivo in collaboration with Archivio Elisabetta Catalano.

INFO
Open from Monday to Friday, from10 am to 6.00 pm. The Ticket Office closes at 3.30 pm.
Opening times valid for the duration of the present DPCM. For updates please consult: www.cinecittasimostra.it
Entrance included in the ticket to Cinecittà si Mostra/ Cinecittà Shows Off (ticket includes access to the permanent exhibitions, guided tours of the film sets, entrance to Ri-tratto rosso – Elisabetta Catalano guarda Federico Fellini and to MIAC, il Museo Italiano dell’Audiovisivo e del Cinema | Italian Museum of Moving Images.

BOOKING AND TICKET PURCHASE
To respect current health protocols and optimise organisation, visit dates to Cinecittà si Mostra| Cinecittà Shows Off must be scheduled in advance by writing to visit@cinecittaluce.it
Tickets may be purchased online at www.ticketone.it or at the Ticket Office after booking by email.

Family Ticket 40 euro (2 adults and 2 children (under 18 years). A family ticket may only be purchased from visit@cinecittaluce.it, it is not available online at TicketOne.