Dreamy costumes on display at Cinecittà 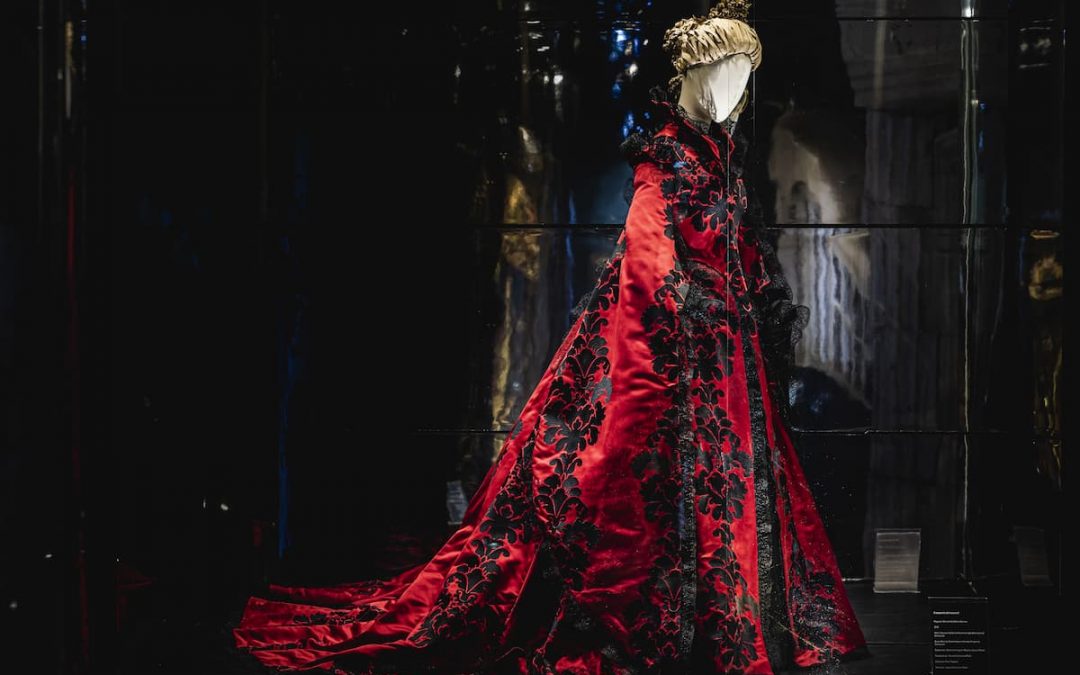 From Sorrentino’s Pope to the Gucci family according to Ridley Scott:  costumes worn by Jude Law, Jared Leto and Salma Hayek are now on display at Cinecittà Shows Off.

The twinkle of armour from Game of Thrones, the riotous elegance of House of Gucci and the overblown papal style of The Young Pope are ready to peep out at visitors to Cinecittà Shows Off as it marks Spring 2022 with a truly memorable change of scene.

For the first time, Cinecittà Shows Off has reorganized its selection of original costumes and accessories to create a journey within the journey that will take the visitor through the historical eras of film, analysing key moments in the development of audio-visual production, from the sword and sandal genre to long-running series for television, and bearing witness to the international acclaim for generations of Italian costume designers.

Visitors are greeted by a display that demonstrates the expertise of the artisans who work behind the scenes to make films realistic with their creations:  a collection of props that includes (among others) helmets from The Name of the Rose (1986), armour from Game of Thrones (2011-2019), the amusing animal masks from Dolittle (2020) and necklaces from Freaks Out (2021).  All kindly loaned by E. Rancati, scenic warehouse.

An embroidered purple silk shantung outfit and a green silk costume worn by Elizabeth Taylor in Joseph L. Mankiewicz’s Cleopatra (1963) inaugurate the new exhibition route, positioned beside props from Ancient Egypt created by the artisans of Cinecittà for the TV series Rome (2005-2007). Designed by Irene Sharaff who won a Best Costume Oscar for the film, these dresses are a prime example of the enormous output of Italian costumiers in the 1950s and 60s.

Keeping this outfit company in the adjacent cabinet is the cope (a long liturgical cape) used in Paolo Sorrentino’s The Young Pope (2016), a triumph of crystal beads and embroidery.  Worn by Jude Law as Pope Pius XIII, this was a key costume in the series.  For his design, Carlo Poggioli researched medieval vestments and those worn by Pope Benedict XVI who favoured authentic 19th century copes, vintage cassocks and headgear.

To mark the year celebrating the centenary of Pier Paolo Pasolini’s birth, two costumes from his segment (Che cosa sono le nuvole?) in the film Caprice Italian Style (1968) pay tribute to the poet-director: made in jute, they were designed by Jurgen Henze and worn by Adriana Asti and Totò.

The display route continues with pieces used in recent films:  from Mario Martone’s The King of Laughter (2021) are the striped cotton robe worn by Toni Servillo as Eduardo Scarpetta and a day outfit of embroidered white blouse and wool skirt worn by Cristiana Dell’Anna as Luisa De Filippo, mother of the celebrated Titina, Eduardo and Peppino. The costumes were designed by Ursula Patzak who won a “La Pellicola d’oro” Award for her work on the film.

Hollywood, care of Ridley Scott’s House of Gucci (2021) shot in part at Cinecittà Studios, provided the striped beige velvet suit worn by an unrecognisable Jared Leto as Paolo Gucci. A bona-fide identikit for the character, it has a pink twin presently on display at the Museum of Academy Awards in Los Angeles.  There is also a printed cotton summer dress worn by Salma Hayek as Pina Auriemma, Patrizia Reggiani’s friend and self-styled psychic. The outfit was particularly flamboyant when paired with multiple gold chains and gemstone necklaces, reproduced by Pikkio like all the jewellery on display.  The costumes were designed by Janty Yates.

The display closes with a costume worn by another eternal diva, bookending the route in a sort of conversation between Liz Taylor and Monica Vitti:  the minidress embellished with gems and sequins worn by the latter in Ninì Tirabusciò – La donna che inventò la mossa (1970) by Marcello Fondato. Typical of early 20th century cabarets, the costume designed by Adriana Berselli was famous for its use in a scene where the Roman actress, who died recently, invents a shake of the hips that becomes the titular “move”.

This worthy tribute best demonstrates the goal of costume designers:  using the quality of fabric and the expertise of design, rather than corporal dynamism, to revive unforgettable performances in the viewer’s memory.

The new display of costumes was curated by Cinecittà Shows Off in partnership with A.S.C. (Associazione italiana scenografi, costumisti e arredatori) and its president Carlo Poggioli, to whom go our heartfelt thanks.

SPECIAL TOURS
The Educational Department of Cinecittà Shows Off has programmed special appointments to discover secrets and anecdotes about the creations in the new display:  on 13, 20 March & 3 April, at 11.15 am and 3.15 pm there will be guided tours for adults plus costume and set dressing themed workshops for children from 5 to 12.