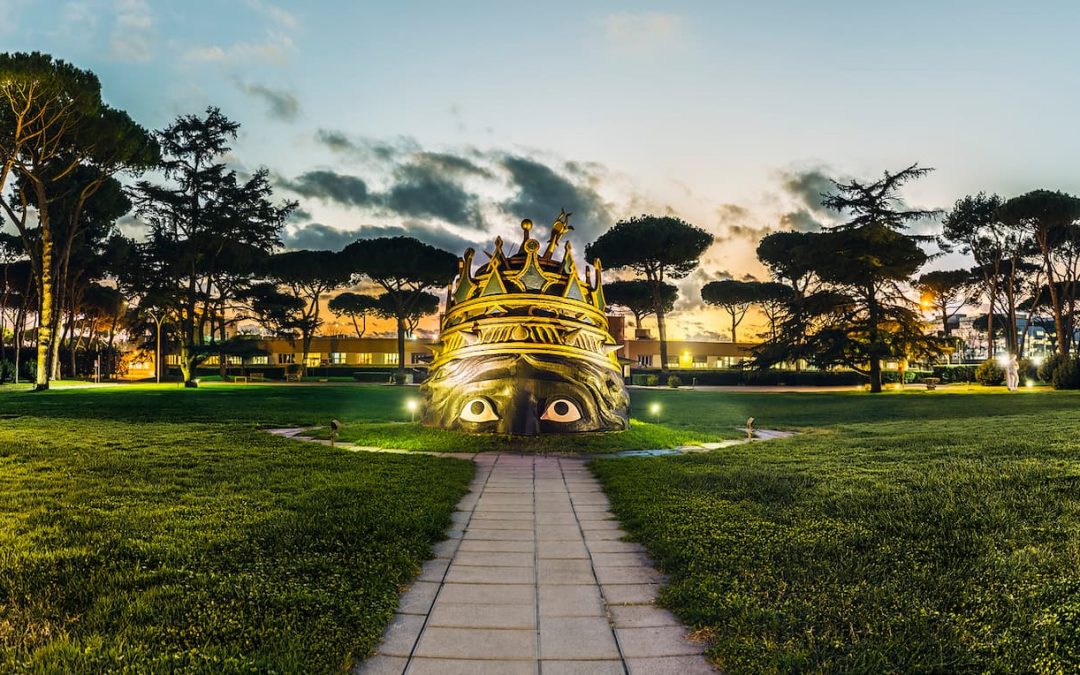 From Wednesday 28 April, the anniversary Cinecittà shows off shares with the Studios, inaugurated in Rome on this day in 1937, it will once again be possible to walk through the entrance of Via Tuscolana 1055 into the enchantment of a world where dreams take shape.

Cinecittà celebrates its birthday and reopening to visitors, all in one day, with many new elements and old favourites. Starting with a new, temporary exhibition dedicated to 25 incredible original pieces from the sets of Federico Fellini: majestic and Baroque set elements tailored specifically to decorate and enrich the scenes of films like La dolce vita (1960), Fellini’s Casanova (1976), City of Women (1980), Fellini’s Interview (1987). This is the first time that the Christ Redeemer, seen dangling from a helicopter flying over the roofs of Rome in the opening scene of Italy’s most famous movie, La Dolce vita, can be admired at close quarters.

Equally striking are the three enormous heads of the actresses Joan Crawford, Greta Garbo and Marlene Dietrich created for City of Women and a large bas relief of a woman inspired by antiquity.

There is a interesting group of statues from Fellini’s Casanova, the film which won set and costume designer Danilo Donati an Oscar for best costumes, including 10 cardinal busts inspired by 17th century sculpture that appear with the suits of armour in Lord Talou’s palace during the seduction competition, a rhinoceros and two suits of armour. In addition, there are an imposing equine breastplate, effigies of the Lion of St. Mark, the symbol of Venice, the sculpture of a wax man and other furnishings such as a fireplace and a bath tub. From Interview, two splendid inlaid torches.

The creators of these marvels were the master film artisans and artists Gianni Gianese and Adriano De Angelis whose able skill made plaster and fibreglass into bronze, copper, porphyry, marble, thereby celebrating the most fascinating game in cinema, that of its illusions.
These Felliniesque objects, the focus of a new cataloguing procedure which now facilitates the restoration and enhancement of the statues before they find a permanent place in exhibitions or as loans to museums, are some of the most recent additions to the Istituto Luce Cinecittà Collection which includes important artefacts recovered and restored over the years, such as Venusia, the sleigh from the film Ludwig and a number of set and costume elements from Pinocchio directed by and starring Roberto Benigni.

The Fellini collection will be on display for one month from 28 April at MIAC_Italian Museum of Moving Images: the latest addition to the Luce Cinecittà museum offer has taken visitors on a journey through the history of Italian entertainment over 120 years through video installations and immersive experiences since late 2019.

Cinecittà shows off is not only celebrating its own anniversary but also the centenary since the births of Giulietta Masina, Alida Valli and Nino Manfredi, commemorating them with a display of unique, elaborate costumes which also pay tribute to the work of top costume designers. It is thanks to the creativity and talent of designers like Danilo Donati (double Oscar winner), Piero Gherardi (double Oscar winner), Piero Tosi (Oscar for his career) Marcel Escoffier and Lucia Mirisola that Italy’s cinema artisans still enjoy an extraordinary international reputation today.

In order of appearance: a splendid large display cabinet has two costumes worn by Alida Valli, an evening gown and a day gown, as Livia Serpieri in Luchino Visconti’s Senso (1954) which were created by Marcel Escoffier with a very young Piero Tosi. The accessories were kindly loaned by famed prop warehouse E. Rancati which has supported and worked with Cinecittà shows off for years.

Following on, the two costumes created for Nino Manfredi for the lead roles in In nome del popolo sovrano (1990) and La notte di Pasquino (2003) are an example of the bond between the director Luigi Magni and the costume designer Lucia Mirisola, a couple in life and on set.

Raw wool, cotton and jute are the natural fibres that Donati insisted on for the African tunic worn by Polybus in Pier Paolo Pasolini’s Oedipus Rex (1967), played by Ahmed Belhachmi, which is displayed here in the only exception to the centenary tributes. Scenic jewellery house, Pikkio, created a splendid crown for this costume to replace the lost original.

The exhibition’s final corridor features the tribute to Giulietta Masina with two costumes from Juliet of the Sprits (1965) and one from Ginger and Fred (1986). For the former, Piero Gherardi created an extremely detailed wardrobe, featuring pleats and shantung silk, to perfectly suit an upper middle-class woman. Donati’s ivory chiffon ball dress, entirely embroidered with crystals and tinsel, trimmed with real white ostrich feathers, which she wore to dance with Marcello Mastroianni in Ginger and Fred’s most famous scene is striking and nostalgic.

Since its establishment in 2011, Cinecittà shows off has displayed over 100 costumes, which have all told stories about Italian and international films, their actors, the great creativity of costume designers and the excellence of Italy’s famed and experienced theatrical and scenic costume makers.

The single ticket, which offers access to all exhibition routes at the special price of €15, makes its return to allow everyone to fully celebrate the birthday of Cinecittà shows off.

The Lunchtime Special Offer is also confirmed for those wanting some cinema with their daily break: the Cinebreak, a €10 ticket available only at 1pm, includes the guided tour of the sets and access to all the exhibition routes.

The return to Yellow Zone also permits the opening of exhibition and museums at weekends, which is why Cinecittà shows off, the other exhibits and MIAC_Italian Museum of Moving Images will once again be open in Via Tuscolana 1055, every day, except Tuesdays, from 10 am to 6 pm (ticket office closes at 4.30pm). Guided tours of the sets will take place at 10.30 am – 12.30 pm – 2.30 pm – 4.30 pm

TICKET INFORMATION
In line with anti-Covid safety protocols booking is mandatory, write to visit@cinecittaluce.it
Adults: €15.00 – Children (aged 5 – 12) €7.00. Under 4s go free.
Family ticket € 40.00 (valid for 2 adults + 2 children aged up to 18)
Tickets can be bought from the Cinecittà shows off ticket office and Ticketone.it