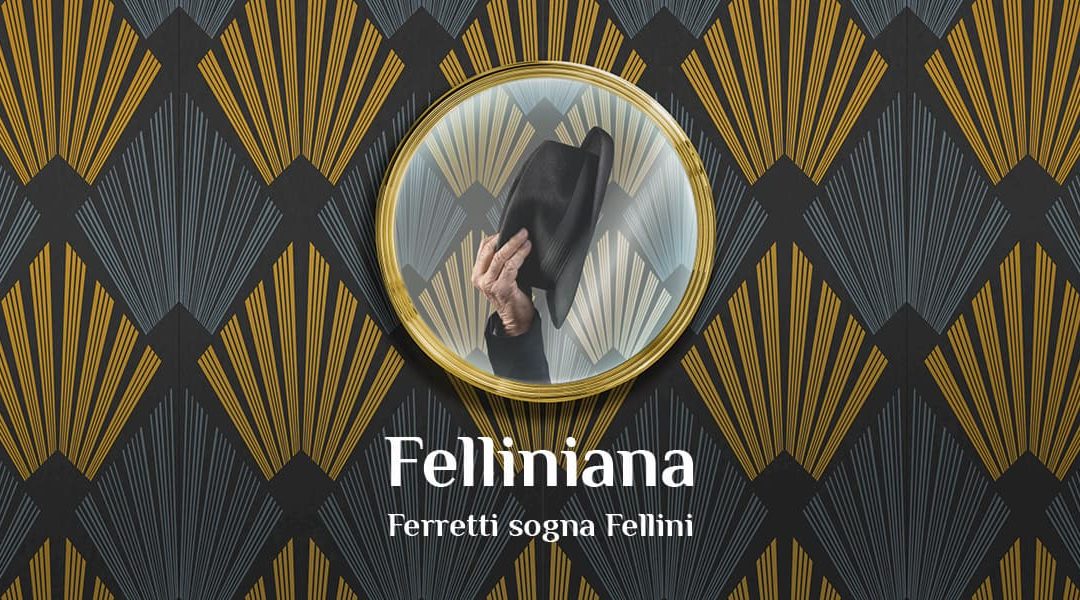 “We’d go to Cinecittà early in the morning together: Dantino, what did you dream about last night? Nothing, I don’t remember. After about a week, I’d start inventing dreams, more or less these were my experiences as a kid in Macerata, that I’d slip under the table to look at the seamstress’ legs […]. He knew full well that I was making it all up.”
Dante Ferretti

Federico Fellini – the most famous resident of Cinecittà, a place he considered to be the ideal city – marked his centenary on 20 January 2020. Naturally, Cinecittà wanted to give him a gift, one both physical and imaginary befitting the style of the maestro. A gift for him and his audience.
Felliniana – Ferretti dreams Fellini is the title of the exhibition-installation that will be inaugurated at Cinecittà Studios on 1 February for permanent display in the historical “Palazzina Fellini”.
It bears the signature of Dante Ferretti, the Academy Award® winning production designer who was one of the magical architects of Federico Fellini’s visions, an artist-artisan able to materialize dreams, and of his professional and life partner, Francesca Lo Schiavo, Academy Award® winning set designer and decorator.

The exhibition offers a bona-fide immersive dive into a world inspired by Fellini’s imagination along with the dreamy and evocative narrative of a friendship and an artistic partnership. An encounter, between Federico and “Dantino”, that took place on the set of Fellini Satyricon in 1969 and a professional partnership that began with City of Women (La Città delle donne) and was followed by unforgettable films such as Federico Fellini’s Orchestra Rehearsal (Prova d’orchestra, 1979); And the Ship sails on (E la nave va, 1983); Ginger and Fred (Ginger e Fred, 1985); The Voice of the Moon (La voce della luna, 1989). The wonderful years of the artistic maturity of the genius from Rimini.

Felliniana, produced and promoted by Istituto Luce-Cinecittà, is a little city inside Cinecittà, a physical yet dreamlike space whose concentrated pathway evokes a Renaissance cabinet of curiosities containing places, signs, and representations of the entire Fellini universe. The exhibition-installation unfolds across three main areas, three stages on a journey alongside the director through the chosen places of his inspiration.
The central room, decorated with a magnificent fresco of film posters, focuses on the car, the symbol of a much-repeated ritual between director and production designer: the journey to Cinecittà which they often took together in a Fiat 125, the very same model that Fellini loved driving through Rome at night, carting his friends around (and for which Ettore Scola would provide a memorable elegy in How Strange to Be Named Federico (Che strano chiamarsi Federico). A space that was both physical (it acted as an office for Fellini) and temporal, providing the setting for conversations and the exchange of ideas, and also for the telling of dreams, a favourite topic for Fellini who would pepper his designer with questions.
The pathway continues with the “Bordello”, a space that summarizes the fantasy world encapsulated in City of Women (La Città delle donne) including the film’s slide and the soubrettes gathered around Marcello Mastroianni.
Then it leads into the last room which represents the Fulgor Cinema, a place of symbolic significance in Fellini’s childhood and the start of his relationship with film. The original in Rimini was restored by Dante Ferretti.
With an artist’s able magic, Ferretti has created a new ideal home for Fellini in these three rooms: new custodians of the dreams that the Maestro shared with him.

The exhibition-installation features significant contributions from many: the sculptors of Makinarium, special effects experts, who created the sculptures of the central figures and extras; for the research and choice of costumes, Anna Lombardi (A.S.C.); Sartoria Il Costume and the prop warehouse E. Rancati; and, above all, the artisans, carpenters and professionals who work at Cinecittà, the people who made, and continue to make, Italian and international cinema great.

Felliniana is the pearl that crowns both the celebrations for the most representative of Italian directors internationally, one who has become a symbol of his art, and the impressive restoration of Fellini’s entire body of work carried out by Istituto Luce-Cinecittà, Cineteca di Bologna and CSC-Cineteca Nazionale. The work on Fellini’s vast oeuvre was essential to enable the comprehensive retrospectives dedicated to him that are taking place around the world in 2020, from the prestigious British Film Institute in London, the new Museum of the Academy in Los Angeles, designed by Renzo Piano, to every corner of the world: Europe, North and South America and Asia. As they are in Italy, where theatres may request newly-restored copies of White Sheikh (Lo Sceicco bianco), I vitelloni, La dolce vita, 8 1/2, Amarcord from 13 January, to screen them for cinema goers.
This is how it is for the world of Fellini, whose immaterial heritage should be curated and physically transmitted, and whose places and objects, like Ferretti and Lo Schiavo’s sets, like Cinecittà itself, are still able to communicate all its fantastic immateriality.

The exhibition-installation is included on the Cinecittà Shows Off route.
Individuals and families do not require advance booking.
Groups over 15 people, CRAL and schools should book by writing to mostre@boxeventitalia.it

Family ticket (valid for 2 adults + 2 children under the age of 18): E. 40.00
Open ticket (no date specified), valid six months: Adults E. 15.00 – Children (aged 6 to 26) E. 14.00.
(for information: mostre@boxeventitalia.it)
Tickets can be purchased at the ticket office of Cinecittà Shows Off and on the website Ticketone.it

Any cookies that may not be particularly necessary for the website to function and is used specifically to collect user personal data via analytics, ads, other embedded contents are termed as non-necessary cookies. It is mandatory to procure user consent prior to running these cookies on your website.